When someone signs up to your campaign as a regular donor, Raisely will automatically handle re-billing that card regularly. Often that goes without a hitch, but sometimes we can't bill the donor for their next instalment because they have insufficient funds, their card has been cancelled, or there's another issue with their card.

This is how Raisely handles a failing regular donation.

First, Raisely determines if the failure was a "hard" or "soft" failure. A soft failure is something like insufficient funds. We expect we can continue to charge the card again, so we'll re-attempt a charge again in the next few days.

If the card has been cancelled then we'll record a "hard" failure. This happens if the account was closed, or the card reporting lost/stolen. We can never charge a cancelled card, so we won't re-attempt the donation.

How we handle soft failures

When a card experiences a soft failure we continue to retry that card and do the following:

3. On each unsuccessful charge, we'll send the "Regular Donation Failing" email to your donor. You can customise this email in your Raisely admin panel > Messages. 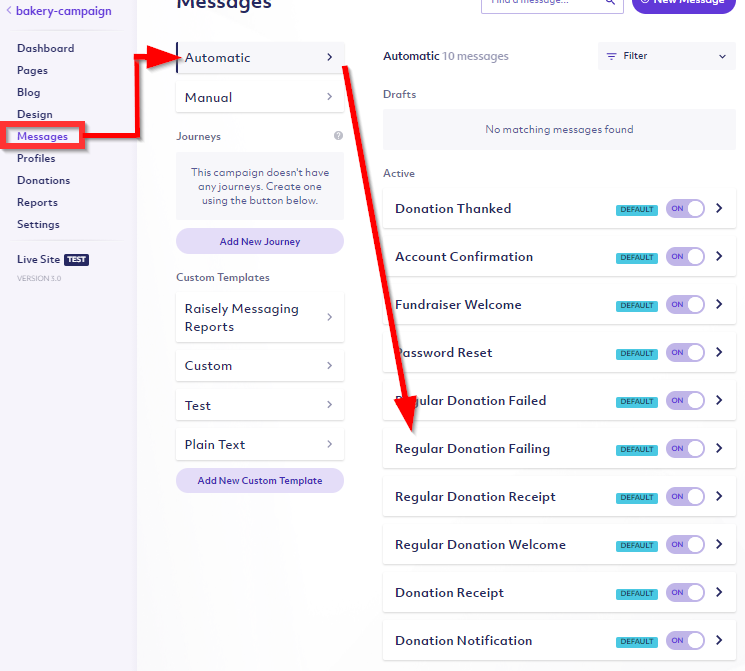 The "Regular Donation Failing" email includes a one-click link that automatically logs the donor in and takes them to a form where they can update their card details if they need to.

4. If we haven't been able to charge the donation over those 4 attempts, we'll change the status to "FAILING". This indicates that it's unlikely we'll be able to charge the card, and you may want to try to contact the donor directly.

5. Once the status is "FAILING", we attempt to charge the card 2 more times, over 2 weeks.

6. If we are still unable to bill the card, we mark the regular donation as "FAILED" after the 7th attempt.

7. Once the regular donation has been marked as "FAILED" we send a final "Regular Donation Failed" email to your donor, with the last chance to update their card details.

How we handle hard failures

When a card experiences a hard failure, we don't retry that card again. Hard failures are more difficult to recover from.

We'll send your donor the "Regular Donation Failed" email when their card fails, but don't currently send them further emails.

Raisely and Stripe don't send emails when cards expire, because we don't need to! Stripe works directly with the card issuing networks to continue to bill cards even after they expire (as long as they are still active).

While we still ask for a card expiration date when they sign up, this is used primarily for fraud protection.

Did this answer your question? Thanks for the feedback There was a problem submitting your feedback. Please try again later.